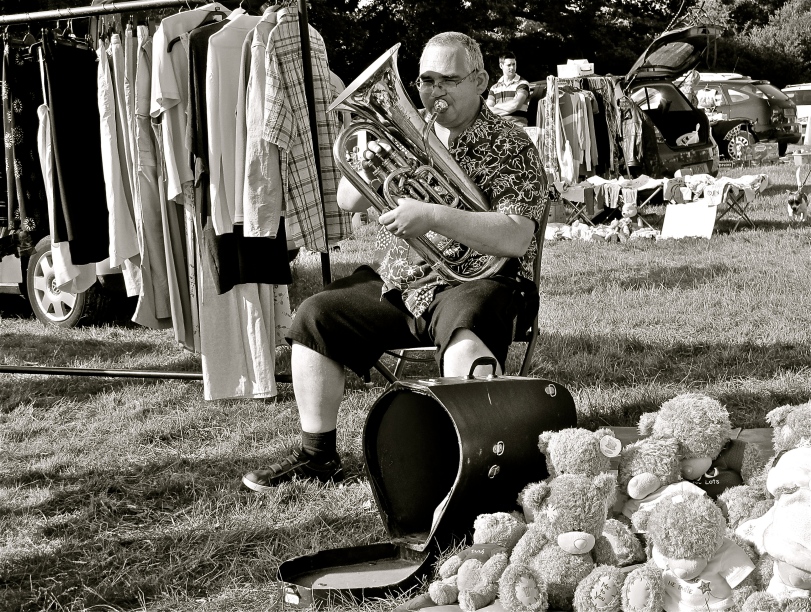 Sunday morning and I am awoken early by my grandson Kaden. He had stayed over for the evening and is a very early riser!

By 6.00 am we were both downstairs eating breakfast cereal, and trying to decide what we might do for the morning.

“I know” said Kaden “We could go to the boot sale at Denmead?”
“I suppose we could I said yawning….but you better get dressed, oh and pack your sports bag with some bottled iced water, and grab a couple of biscuits in case you get hungry Kade, you know what you’re like?”

With that,he was off upstairs to get ready, returning some minutes later, wearing his lucky dealers cap!

“I’m ready…..he shouts” “I got the bag and the stuff you said, c’mon, let’s go?”
So we were off, leaving the remainder of the family sound asleep upstairs.

Kaden had the grand sum of £10.00 and was mildly excited at the prospect of doing some nifty deals. Convinced that lucky cap he was wearing would bring him luck!

As we commenced our steady treck around the many tables and tarpaulins spread out on the grass, displaying a variety and selection of their goods, we suddenly heard the distinct deep tones of a tuba!
The tunes were instantly recognisable as those from the Andrew Lloyd Webber’s show, ‘Phantom of the Opera”

Then, on turning into the second row of parked vehicles with their boots open. We were presented with this incredibly jolly, and indeed very talented gentleman. Apparently entertaining some enthralled local teddy bears.

It would be fair to say though, that although Kaden and myself were more than suitably impressed by his playing ability. This particular rendition pumping out at 7.00am in the morning, was receiving somewhat mixed reviews, from a wide range of the many sellers, and buyers, who were present that morning!

By this time however, Kaden was engrossed in the ‘deal of the century’ and commented to the seller involved, “How much do you think he would want for that?”
The seller quipped back, “I don’t really know mate, but we was here proper early today, and after a heavy night out on the booze…. And he was still playing it then! I just wish someone would buy it off of him! In fact the way my head is feeling right this minute, I would gladly give them the money myself!”

“Portsmouth humour eh? Obviously, a tuba pain killers, would have been more appreciated by this fellah!”