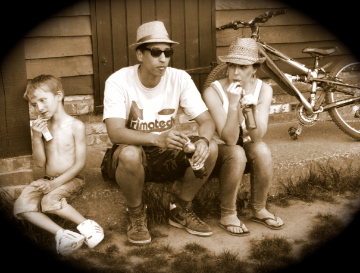 This photograph shows just three members of my family. It was taken after on an outing to a place called ‘Manor Farm’ near Southampton.

To the left of the picture, is one of my four fantastic grand children, namely our Kaden.
To his left, is my daughters partner Stefan. And to his left again, is my beautiful daughter Jodie, or ‘Peanut’ as I call her.

We had all been out together as a family. Spending the full day enjoying a very memorable and appetising picnic. Afterwards we spent our time entertaining the kids in the swing parks, walking through the woods together, even played a game or two of football.

This particular shot was one I caught as I returned from buying drinks and Ice cream.
I love how natural it looks and how the image truly seemed to lend itself to a black and white format.

Also, at the time this was taken, everyone was somewhat walked out, and feeling jaded!

For me though, it was one of those shots which appealed to most who saw it, and even now it seems to remain a favourite.

When I look at it, it always seems to echo back to a time when summers were about the simpler things, and entertainment was uncomplicated.

I love that it is unposed, natural in its presentation and proved a pleasing capture, even to those appearing in it!

I always thought it would make a neat Album Cover?

But then of course I am being understandably biased………But what do you think?