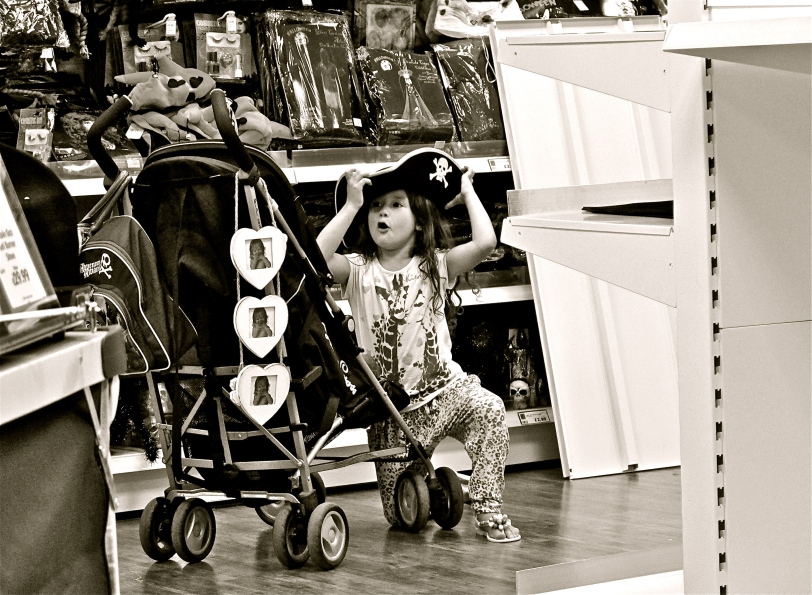 On a rare outing to one of Portsmouth’s newest stores with my good lady, I endeavoured to maintain a relatively up beat attitude whilst we slowly and laboriously trolled the isles together…

Yes it was quite interesting to look around this store and to see what they had on sale or maybe to snap up some bargain buys for the four grandchildren to add to their christmas stocking fillers?

Well we saw a few bits and pieces, and these were duly placed in the trolley as we continued on our way over all three floors!

At last I spotted the sign for ‘Cafe’ and tentatively suggested we take a break from shopping and maybe indulge in a strong coffee. Maybe even share a toasted sandwich together? Please!

Well; to my delight this request was readily accepted, and we quickly sought out an appropriate seat placing our shiny shopping trolley alongside us.

I then went to the service till where I ordered up our drinks and chose a hot cheese and vegetable panini as we had discussed.
Enjoying our tasty snack and sipping our coffee my eyes began to scan around the store. Alongside us both I noticed this little girl in the isle singing out for all she was worth and brilliantly entertaining her obviously bored little brother ensconced in his pushchair.

She must have tried three or four hats whilst we sat there and with each one she put on her head her little brother just seemed to laugh louder and louder, even finding it hard to catch his breath at one point.

She really was quite the little entertainer, and with a great voice to match I might add.

Her parents had obviously seen this all before though and didn’t seem as overly impressed as both myself and my good lady were at the time?
Anyway, I just couldn’t resist capturing this image; which still makes me laugh when I see it.

If Simon Cowell had been drinking coffee here today then I am almost positive that he would have signed her up in a heart beat. She would definitely have been invited to boot camp at least!