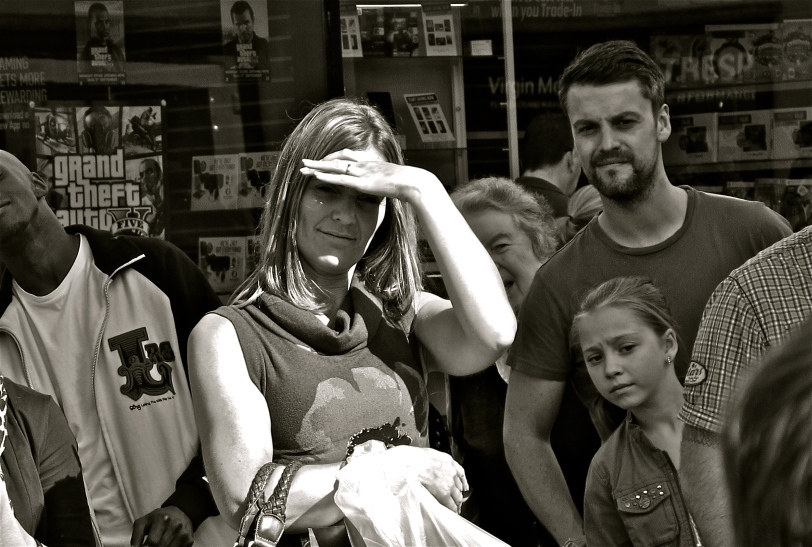 I love it when there are good street entertainers in town centres.

These amazingly talented under rated people in my eyes are just the best thing ever!
They bring an excitement and a vibrancy to what can often be rather dour dull places at the best of times.
Equally they provide a perfect opportunity for photographers to overtly slip in with the crowds completely un-noticed; allowing them the unique opportunity to observe their quarry at close quarters.

Basically, whilst everyone is watching them… you are watching everyone else.

The act that were performing this particular day were two kind of acrobatic contortionists?

These two were incredible, almost effortlessly being able to twist themselves up in knots and shapes that would bring tears to the eyes of most ordinary beings! I stood in awe as they created positions I don’t even want to get into?

Not that this would have even be humanly possible in my own particular case!
(Were indeed any such desire to overtake me anytime soon?)

These performers thoroughly thrilled and impressed the assembled on lookers; earning themselves a raucous round of cheers and applause as they took their final bow!

I liked this particular capture; because to me it looks to all intents and purposes, like the people in shot are all standing on board an old flagship somewhere in rather rough seas?
Indeed the lady in the foreground looked to me like she is just about to announce to her crew…”land ahoy.”

Incidentally I left very shortly after this image was taken. I was actually beginning to feel a bit queasy to be honest!