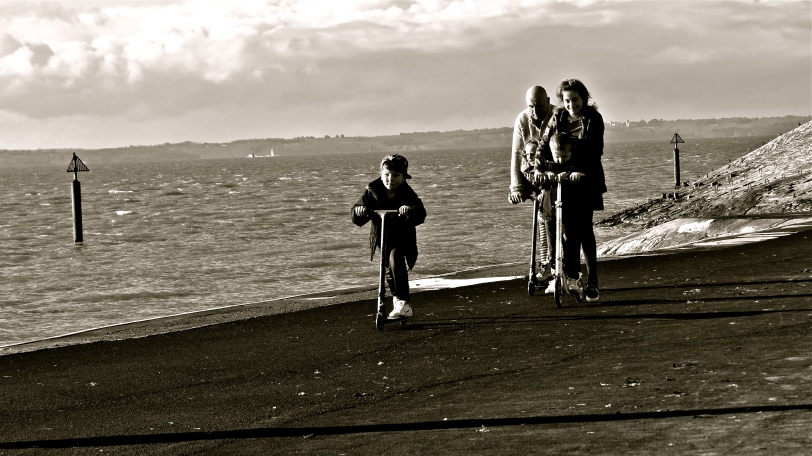 The temperatures here were cold again today but nevertheless I was determined to venture out to see just see what, if anything, was happening down in Southsea.

I was sitting by the window of my favourite cafe where I had ordered myself a hot coffee and my favourite treat of fried egg roll.
Soon after it was placed in front of me on the table I had satisfyingly burst the soft yellow egg yolk inside the roll before smothering it in black pepper.
Then after sprinkling it with a mere smidgeling of salt I took a large bite then sat back and savoured the moment.
(I think I might need to get out more you know?)

Suitably rested and having now been fed and watered; I left the cafe and walked up the hill towards ‘Lumps Fort’
Suddenly I distinctly heard loud shrieks of laughter from up ahead; although at the time I couldn’t quite place exactly where it was coming from.

But then appearing at speed over the crest of the hill came this family, comprising of a Dad and his three children.
They were all racing each other and enjoying every minute of it!

I grabbed this shot as they got closer and then they all hurtled past gaining more speed all the time. As they all neared the finish line I noticed that the little lad had managed to stay out in front, and therefore he was justifiably crowned the races outright winner.

The Dad incidentally; who was accompanying his youngest daughter by standing on the foot plate behind her did his absolute best to catch the other two but was beaten fair and square.

They both eventually arrived in last place despite the eldest daughter having politely and very sportingly I might add having done her utmost to hold back.

“I won, I won I won Dad” screeched the little boy. “You did son…well done. Well done all of you, great race!”

Then as they all settled down in their celebrations it quickly became apparent that in their haste to challenge each other for the scooter championship race of the decade, they had completely forgotten that Mum was now nowhere to be seen!

“Oh no she must be miles back” said the Dad “Keep an eye out for her everyone?”
“Can we all get an Ice cream though?” said his youngest “Then we could all wait here for her?”

But as they all took their places on the sea wall still looking up towards the Fort for their Mum, Dad returned looking somewhat dejected only to inform them that disappointingly the ice cream stand was closed for the day.

So sadly; the victor never did get to enjoy his spoils; and for some considerable time afterwards, there was still absolutely no sign at all of the Mum.

Perhaps next time they need to think about purchasing another scooter?