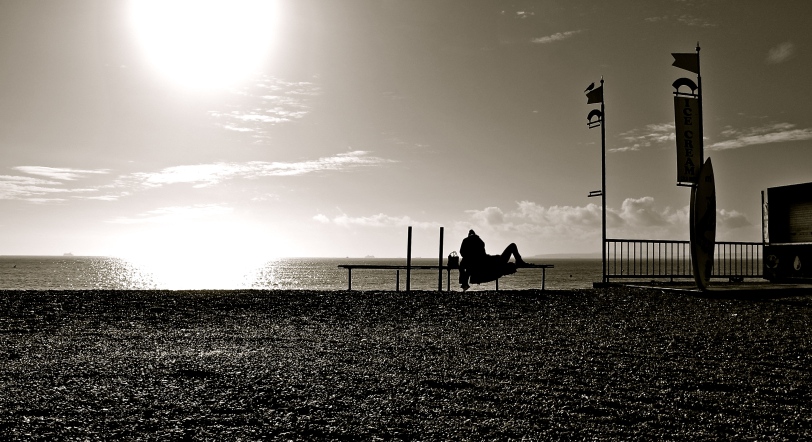 This was Hayling Island today.

I had been out and about taking a few snaps, but the bitter weather made me think I might be better off returning home a bit earlier than I had anticipated, and maybe downloading some of my photographs for editing.

As I walked along the shingle, passing the funfair (which was all closed up) and towards my vehicle which I had parked in the local car park; I noticed one solitary vehicle arrive and the driver then exit whilst speaking into his mobile phone.

A short time afterwards another vehicle then arrived from which a rather attractive smiling faced female driver emerged, walking hurriedly towards the guy who had previously parked up.

Their faces beamed when they saw each other. Then they both stood there hugging and kissing; him firmly holding her around her waist her feet now up off the ground.
Playfully swinging her around as they enthusiastically and warmly embraced.

Still staring into each others eyes they strolled hand in hand up the beach and towards this solitary bench overlooking the shore line.

He sat down whilst she lay her frame along the length of the bench her head resting in his lap. I was taken with the way in which both figures were caught combined and silhouetted within the frame.

So as I drew closer towards them I captured this shot. I did very little in the way of editing but just liked the final shape and balance of the capture. Seemingly reflecting back their feelings for one another both caught in that one brief moment?

By now a bit colder, I eventually arrived back at my car. As I drove out of the car park though, I found myself giving way to, and waving on, a vehicle to my immediate right; which contained this very same couple.

He smiled and acknowledged my polite gesture; then both laughing excitedly they drove away together.

Following their car for a brief time before they turned off I began thinking that maybe I had stumbled across a special venue for this very secret rendezvous?

But I guess I will never know?

Although if I were indeed correct in this somewhat judgemental assumption; then I also hope that for their sakes…nobody else knows either!