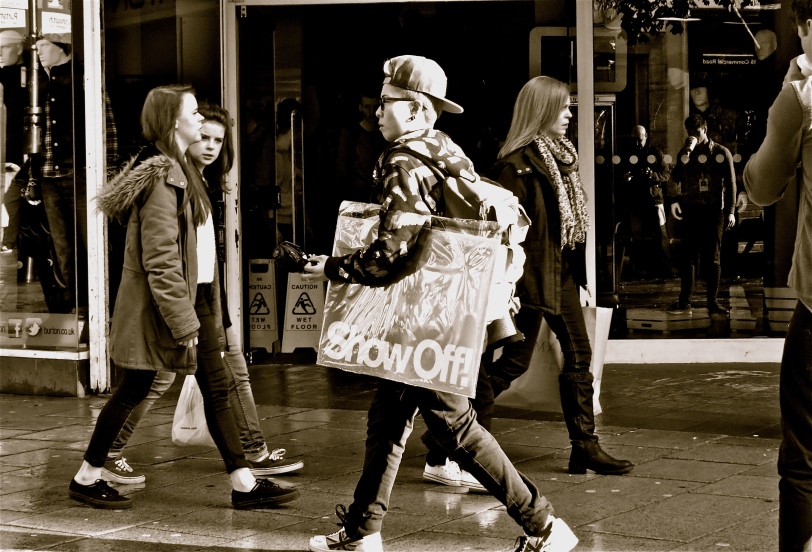 So there I was; standing in Commercial Road in Portsmouth.

Unusually for me though, I was carrying a shopping bag with a gift for one of the grand kids; when I saw this very fashionable young guy walking towards me carrying a plastic covered poster under his left arm.

I assumed he might be a local Art student who was no doubt of the belief that their might be a chance of rain??? And therefore keen to preserve his art work?

Now I would like to emphasise that this was purely a presumption on my behalf; as we do indeed have an excellent Art College relatively nearby?

Watching him draw ever closer and hoping to snap off a frame, I then found myself looking just a tad obvious, as I hurriedly endeavoured in my uniquely clumsy and totally un-professional manner to raise the camera whilst still holding the shopping bag precariously!

Then deploying the well known thumb technique; I CLICKED the shutter. I am under no illusion however that my Inspector Jacques Clouseau Style did not go un-noticed!

Returning home I downloaded the shot; just hoping I had manged to get a half decent image?

Now considering I struggled, and possibly even broke all the recommendations about how to become invisible whilst on the street, I somehow think that the Inspector Clouseau style may well be the way to go for me?

But then I always was a bit of a ‘Show off!’

One thought on “‘Show Off’”