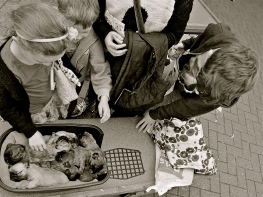 We were over in our local Pet store yesterday when I chanced across a young mum who was carrying a small cat travel basket into the store. She was being followed closely behind secured to it’s collar and lead by this anxious looking Pug bitch who had very noticeably recently been delivered of some pups!

We weren’t in there for long (Just to get some advice about our grandsons little aquarium which we got him for his Birthday recently) anyway as we were leaving; I spotted this same lady with her dog now standing outside the store. I also noticed that she was poking her finger into the mesh of the travel basket and so enquired if she had the dogs puppies in there? “Yes I have actually; would you like to see them?”
She told us that she had just had them checked out and they were deemed all to be super healthy by the in store veterinary team. I asked if she would mind if I took a photograph of them? And again she very kindly obliged.

I tried initially to take a shot through the mesh so I didn’t disturb them all, but she then asked me to hold her dogs lead, and quickly un-clipped the catches securing the lid lifting it completely off.

“There’s eight of them she said” “Oh hang on a minute; there are eight still in there aren’t there?”
Then anxiously she commenced counting them all. Soon though she detected that one of the smaller pups was there; but just well hidden underneath all his brothers and sisters.

“Oh thank God for that she exclaimed; I thought the vet might have pinched one” and then she laughed loudly.

I quickly took a few images, thanked her very much whilst saying how beautiful they all were when I saw that we were all being stared at by the anxious mother of these eight little pups. However, she was immediately petted and calmed and offered reassurance which solved her stress levels. It was obvious she was a very proud and extremely tolerant mother.

Then just as we walked off some young children who were just leaving the store also spotted them and were straight over there to see and ask if they might touch these little crowd pullers.

Luckily for the owner though; the taxi she had pre-booked then arrived; and they were all quickly loaded up into the back seat and driving for home.

Once again…I was very glad that I had my camera with me!