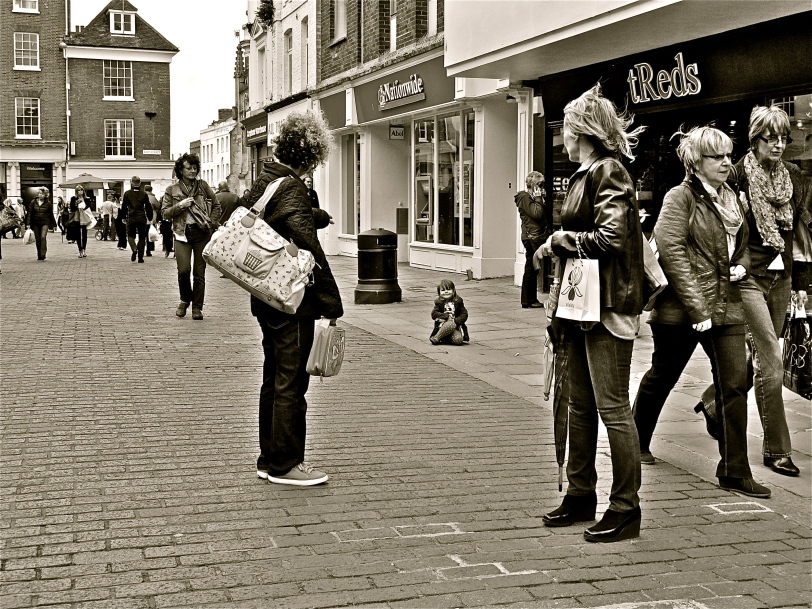 Today was a mixure of sunshine and occassional showers. But that was’nt going to put me off paying a cheeky little visit over to Chichester.

It was relatively quiet in terms of shoppers and even the popular market which is held here and which is normally busy was all but empty on my arrival.

I grabbed a cup of coffee after which I carried on strolling around checking in at some of my more frequent haunts.

I must have been walking around the town for over an hour and not really had much luck photographically speaking; when suddenly I spot this little girl who had decided that she had walked quite far enough for one day; and that a ‘sit down’ protest was the most effective way of drawing some attention to herself!

I had to laugh as her mother and her friend tried patiently to persuade her to get up again; explaining that if not, they would have to simply leave her there; and that somebody else would then have to come and take her home?

Despite their best efforts though; this little pavement protester was having none of it!

Initially I thought that I might miss this opportunity; and that by the time I had raised my camera and lined it all up, the little girl in shot would have rejoined her mother?

But it transpires I had more than enough time to walk up a little closer to the action and pleasingly for me; grab this little image.

I love the cheeky expression on her face and the way that the lady shopper heading down the street in her direction has her attention drawn towards the spectacle; as this tiny rebel sits there all alone; in her single act of defiance!

It actually took her mum and her friend a good deal of time to appeal to this little girls better nature until she eventually gave up.
Then smiling broadly she got back up and ran back to join her mum and her friend; knowing full well her scheme to re-focus their attention had indeed achieved it’s desired result.

Just shortly afterwards the rain came bucketing down and soon the street where she had been sitting was deserted of it’s shoppers as everyone in the open dived for shelter.

So fortuitously this little girl had managed to time her ‘sit down’ protest perfectly. For had it been just a few minutes later then she would have had to quickly think of a ‘Plan B’