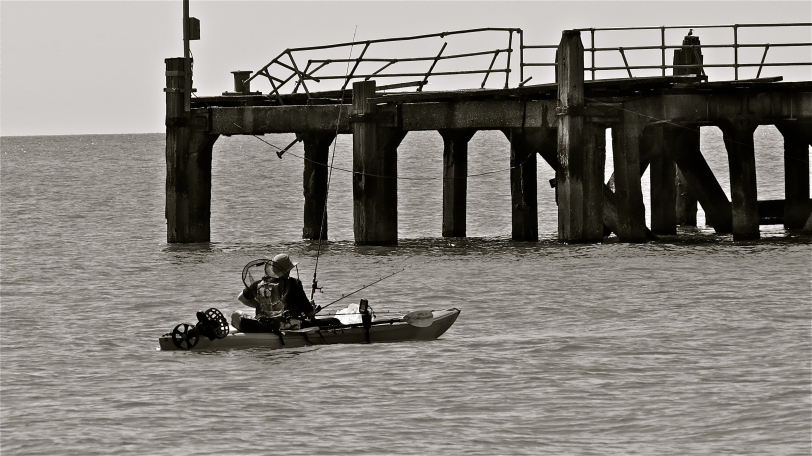 Now most people down here in Southsea take a rod and a reel and a bag of rag-worm and a sarnie; and even their dog, when the opt for a days free fishing.

So I was particularly impressed to see this particular individual out in his today in his ‘kayak’ sporting no less than three rods!

With his catch net tucked up behind his seat and his wide brimmed hat for protection from the sun. I noted also that he had a rather interesting electronic gizmo strapped to the side of this kayak; and which I presumed was obviously something technical?

Maybe it was to help him indicate exactly where the fish were gathering?

Then again it might have been a little TV for just in case he got bored waiting for a bite?

He also had taken with him some fluids in order to re-hydrate when thirsty; and of course the obligatory packed lunch!

I just hope it wasn’t fish paste or sardine sandwiches; especially with the rather large gathering of hungry seagulls that were screaming and swooping around looking very curious?
Many with their eyes fixed on this craft as he slowly paddled in towards the end of our very famous South Parade Pier.

Sadly this is no longer accessible to ‘joe public’ and remains closed. It’s future as yet still un-decided…sad times!

I was even more impressed to note that this kayak even had it’s own little engine and propellor…I guess to get him to where the best catches were quickly?

Either that; or it possibly doubled up as a food mixer so that he could knock up a cake or two whilst he was out there?

But then maybe not. Because as the old saying goes…”you can’t have your kayak and eat it too!’

I know I know…I’m sorry!
The temptation to share that pathetic attempt at a pun with you…really was just too good to resist.

So there you go…not something you will see down here everyday just bobbing around and about.

The only other thing I had a degree of concern about though after capturing this image was…”What if; having been so thorough in his preparation and planning and having presumably thought of just about everything?”

“He suddenly needed to take a bathroom break??”

“What would you do I wonder?”