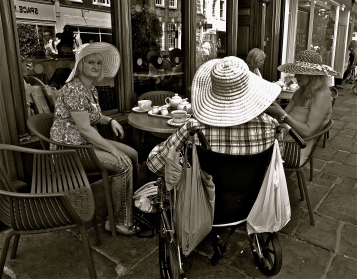 I was up early again today and so I sat for a hour in the garden with a cup of coffee and a slice of toast.

It’s that time of the week again where my better half and her mother take off to do their weekly shop. So I of course am free to do whatever I please…

Not needing too much in the way of persuasion I loaded up the cameras into my sports bag and headed over to Chichester; one of my favourite haunts on a Wednesday.

I actually had a really pleasant run out there this morning; whilst listening to my music at a quite generous volume!

And as it was early I even had time to get myself into some of the many charity shops over there and see if there were any bargains to be had?

Sadly there was nothing that took my fancy and so I began the serious hunt for images to capture. For some reason today I found myself being accosted by a variety of people from various organisations each with something to sell. However I politely declined them all and instead moved swiftly off; weaving my way past the ‘Big Issue’ sellers then the ‘Paintball’ chappie, and finally past a group of Spanish kids who looked to be making a video about the area?

Chichester was buzzing today that’s for sure.

It is always difficult for me to ignore people; and I always hold a sense of guilt that I have just brushed them off; mostly because they all seem to deliver the same old diatribe of polite yet hugely superficial often patronising conversation. All of course before eventually getting down to the nitty gritty of why it was they had stopped you in the first place?

Anyway…they did seem to persuade some people they had stopped to listen; and most for a lot longer than I myself had achieved.

It was only a matter of minutes though before I managed to take these irritating distractions out of my thought process and instead began my search for interesting shots of the people who were out today.

However somewhat distracted I found that as I soon wandered back to the top of the town where these same people who had tried to collar me earlier had obviously decided I might be worth one more try at re-engaging?

But again politely explained that we had already spoken earlier and so they were quickly back looking for some new faces to hijack.

I then spot these three ladies what lunch as they took a seat at this table outside the ‘COSTA’ coffee house. One of the more favoured spots for many connoisseurs. I just loved their choice of hats and thought that they all looked great sitting there in the shade.

Crossing over towards their table I raised the camera and was just about to take my image when the lady turned around and looked straight into the lens. I smiled at her and nodded as I walked slowly away checking the image on my screen.

Then I clearly hear a voice say “Here…that bloke just took our photograph he did” “What bloke” said one of the other ladies…”Over there look; that bloke…the one walking away”

I just hope that if they should ever happen to see this image sometime; that they are pleased to see themselves? Each wearing their individual posh floppy hat and enjoying a grand cup of coffee together over at Chichester.

One thought on “‘Hat Trick’”