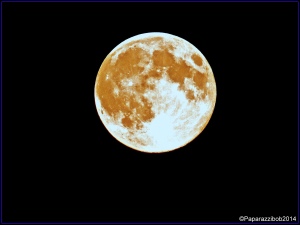 I felt that I should include this image of this months full moon which occurred last night August 10th.

I read up a little on it to discover that it is a moon of many names. In North America it is referred to as the Sturgeon Moon. This reflects back; so the story goes to when this large fish roamed plentifully in the Great Lakes of Hudson bay.

This Moon is also referred to as the Green Corn Moon or the Grain Moon.

In 2014 though according to NASA this full moon will is 14% closer and 30% brighter than other full moons of the year.

According to the information supplied on the earthsky.org website as measured from the centres of the Earth and moon, it lies 356,896 kilometers (221,675 miles) away.

The moon and Earth won’t make such a close encounter again until the full moon of September 28th, 2015, at which time the two will only be 19 kilometers closer together.

In addition to this spectacular sight last evening and indeed over the next few nights up until the 14th August there is also the annual ‘Perseid’ meteor shower. The ‘Perseids’ have more fireballs-or very bright meteors- than any other such shower.

So although this supermoon will be shining in the sky during the peak meteor-watching hours of midnight to dawn this event can still nevertheless be sighted.

I just think that it is absolutely incredible to think that all this is going on above our heads whilst we sit there with a cup of coffee relaxing on the sofa?

So tonight if you get five minutes; maybe pop out and take a look at the moon. I can promise you this is one close encounter that you really don’t want to miss.