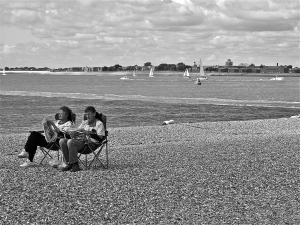 Now often when I take a walk along the promenade down here in Southsea; I frequently see people sitting there in their cars either reading their books or their newspapers. Others are snoozing with the radio on; and some have binoculars which they stick out of their car window presumably to admire the fascinating views on offer?

However, this particular scenario was a first for me.

Firstly I watched as this couple removed these folding chairs from the boot of their vehicle and then grabbed themselves a newspaper each.

Ah I thought to myself…no doubt they are going to pitch themselves up on the pebble beach here and soak up the atmosphere admiring the ever changing scene presented before them; whilst of course maybe catching up on what their newspapers had to say in between?

But no! They assembled the chairs and promptly placed them to face the opposite way entirely therefore missing anything which was going on behind them in the busy shipping lanes and the entrance to Portsmouth harbour?

And there they remained both with their glasses on completely content and obviously lost in their reading.

But it just seems strange that people would drive all the way down to one of the most visually interesting and attractive locations on our seafront; pay the parking fees; grab their folding chairs and newspapers then pitch up so that they completely forfeit the primary reason that most people would usually come down here for in the first place?