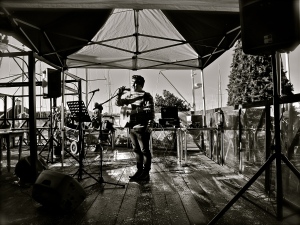 Another chance capture taken from my recent visit to Port Solent Marina.

As stated in an earlier blog this was a very well attended event; and one which offered the visitors a plethora of different things to amuse and entertain them; including this young lad called Marley who had set himself up with his speakers and mic on the boardwalk itself. In fairness he was an excellent young singer.
After singing a selection of Christmas Carols; all of which were well received by the crowds who were out in their Christmas finery he seemed to gain more confidence.

At one point a small gathering of shoppers had positioned themselves alongside him and he began to confidently shout out “Are their any requests people would like to hear today?”

Although not many responses were initially forthcoming most seemed quite content just to sip their drinks or to sing and sway along to his tunes. Then to my sudden and pleasant surprise he began to sing some of his favourite Frank Sinatra songs! Which for a young guy his age did surprise me a bit I must say.

But I thought that he did a really good job and those old ‘Rat Pack’ songs certainly got the crowds singing along with him during the chorus lines.

As I said previously in an earlier blog; I thought the way that the whole event had been organised really did give emphasis to that Christmassy feeling. I liked the fake snow effect which had been blown around and had collected on the boarding at his feet; and of course the large beautifully decorated Christmas tree you can see in the background. All of this served to help create a totally believable and memorable setting for this time of the year.

This young lad sang the whole time we were there and with only his guitar as his accompaniment. He was obviously a very talented and accomplished musician and one whose talent brought a lot of pleasure to everyone who spent time listening to his well rehearsed repertoire of songs.