Well there we were; myself my better half and our youngest grandson Beau; just ambling around the perimeter of the lake having fed a selection of birds and been persued part way around by one rather large hissing male swan; who seemed determined to help himself to the remainder of the bread crumbs we had been desperately hanging on to.

The knack for any novice visitors to the lake is to walk and feed!

For to do so is often a recipe for disaster. Because it is then that the swans in particular commence acting like a small gang of potential ‘Hoodies’

Occassionally they will clumsily and somewhat intimidatingly climb out of their watery domain and waddle towards you. With their necks extended and heads raised they commence to strut forward at their full height. Some with wings flapping; moving ever closer to the keeper of the bread.

Meanwhile the small flotilla of other sea birds who have flown over to join them then take off and commence swarming around and above your head crying out for their share of the bread. As you cautiously back away trying to look as unconcerned as possible so then the pigeons and starlings collect and hurry about your feet.

To the un-initiated; this you will appreciate can often appear quite threatening?

Luckily we had managed to keep on the move and were now well clear of any potential threat. So leaving the rogue birds behind us I looked to my right to see these two young women arrive and pitch up beneath this tree where they commenced stretching and warming down from their recent jog along the front. Bet they never ran as fast as we had just done though eh?

They had with them a selection of training apparatus and this was being packed away in between them completing each exercise. They looked to be quite serious about their fitness and were obviously in preparation for a forthcoming event?

We on the other hand having been sufficiently stretched and over run by the local wildlife were headed for the van; and a nice hot drink. 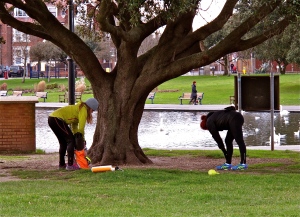 I couldn’t help thinking though that these last two exercises which the girls are performing; were possibly inspired by the actions of those rogue swans we had witnessed earlier as they stretched their wings after alighting from the lake?

3 thoughts on “‘Swanning Around’”