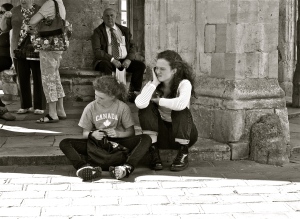 I felt for these two young sisters over here from BC and out visiting Chichester with their parents.

When the parents initially started up their conversation with friends whom they had bumped into; both girls initially just stood together and were chatting no doubt convinced that they would’nt be standing around too long?

However they were to be disappointed as the conversation seemed to go on and on and on…until eventually both sisters sat themselves down on this step and commenced staring over at their parents in the hope that they might recognise their bored expressions and maybe hurry things along a bit?

Sadly this was not to be the case, and instead both girls remained there looking somewhat dejected and bored the eldest sister even yawning at one point; not impressed at all.

Amused I quickly captured their image before then crossing over towards the Cathedral grounds.

Looking back though I was pleased to see that the parents and their relatives who were accompanying them were by this time walking back over towards the girls whose body language seemed to change almost magically. Their sheer delight at moving on again at last being all too evident.

But then without warning the whole group stopped once again. Both sisters looking bewildered before one of their party produced a street map of the area; and they began scanning over this. Once again deep meaningful discussions ensued.

However agreement appeared to be very quickly reached and I watched as they all nodded their approval and began smiling. Then linking arms they all moved off towards their next destination.

Personally I think that both sisters were just happy to be on the move again.

In truth they were probably not really all that bothered at all where it was they were headed off to? I think they were just keeping their fingers crossed and hoping that they would’nt encounter yet another lengthy and impromptu conversation further down the street.

After all… they were supposed to be on vacation.