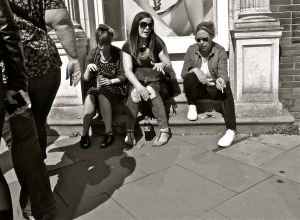 Over at Chichester and I was once again looking to grab a few shots of the un-suspecting shoppers who were out and about in the town.

It was one of those days when I had managed to drive over and to get parked up early. This meant that I could stick the kettle on in the back of the van and brew up a fresh caffitiere of Columbian coffee.

I usually spin the front passenger seat around and put my feet up on the vintage storage trunk which I carry in the there; and which doubles up as a storage box and a table top for when me and the grandchildren need somewhere to put their sandwiches or chips etc.

So anyway having spent a good half an hour listening to the radio broadcasting news about it’s predictions for the outcome of our general election campaign here in UK.

It was a pleasure to sit there sipping from my large chrome cup what was my first dark rich cuppa of the day. Afterwards I cleared up before sliding open the side door and alighting from the van; smiling at the little head buzz which the strong coffee had considerately provided.

Then that was it…I was ready for the off.

Walking through Chichester and visiting some of my usual haunts in the area I then spot these three girls who decide to pitch up and sit on these steps outside one of the larger fashion outlets.

The two girls on the right of the photo then proceed to roll themselves a smoke each before launching into a deep discussion with one another.

Meanwhile the other girl on the left remained disengaged and instead began carefully unwrapping a fresh pastry she had purchased.

In fact she was content to just listen and observe as the two friends continued on with their debate which by this time incidentally had become a little more intense.

I then crossed over the road opposite and headed over to where they were sitting adjusting the settings on my camera as I did so.

Once I was practically standing directly in front of them I fired off this image.

As I did this the girl in the centre of shot stopped momentarily and stared directly at me through her dark glasses.

However by the time she had worked out whether or not I had actually just taken their picture or not I was long gone.

Heading back on my way up to the top of the town.