‘Me and my Shadow’ 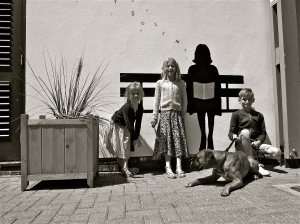 Yes it’s that time of the week again…Sunday!

Our son and his missus were off at a friends wedding over in Gosport. So being the kind hearted and accommodating grandparents that we are; we were once again left with three little people to stay stay with us overnight and of course one ever growing puppy dog named Diesel.

In fairness they are all superb company and more than capable of entertaining themselves with craft or art work. Or if the mood takes them with some clever manipulative tactics they can even negotiate some cheeky time on the ipad or computer games.

Anyway whilst their parents were busy pressing clothes and generally getting themselves together for the big event; we loaded up the van and the car and took off to exercise the dog and give the kids a chance to run and take in some fresh air.

We all ended up over at Port Solent where there is an expanse of green grass and wooded areas that can all be explored and ventured into. At one point the girls became separated and it was some time before we eventually all got back together again. Our Kaden myself and the dog eventually made our way back to the van to get some water to give Diesel and he drank like he had just spent a week in the Sahara.

We then caught up with the girls and made our way to the American Diner ‘Dean’s’ where the kids ordered a selection of ice cream and proceeded to scoff the lot.

We then walked the dog around the complex for a while before finishing off at the kids play park area.

On the way through though we stumbled across this little silhouetted image of a lady sitting reading her paper; and so I asked the kids to quickly take themselves and the dog over there so that I might grab a picture of them all.

Anyway he polished this off like it wasn’t even there and then casually made his way over to the sofa where I usually abide; and with a huge sigh he fell asleep exhausted from his run.

What his owners neglected to share with us however was that Diesel is an SBD boxer!

Honestly he absolutely stunk the place out last night.

And unfortunately for us we had to have him upstairs with us for the night where we were intermittently treated through the course of the morning; to more of the same.

Eventually I could stand it no longer and ended up back out walking him at 5.30am this morning.

Now he is once again sleeping soundly in his bed and I have taken the additional precaution of leaving the patio doors wide open.