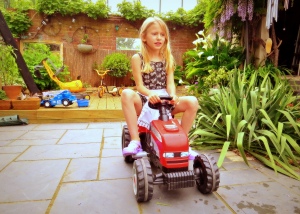 Well it’s Sunday yet again. So here’s a quick update from two very proud grandparents. This time though mainly about our Megan Beau and Harri.

Now; before I start fawning over the kids.

I do appreciate that having recently read a couple of previously published blog posts, (which were not I am pleased to announce directly attributed to my own!) some out there in the great blogosphere find this sort of blog entry to be a sort of ‘so what?’ or ‘who cares?’ type of post.

So to those few out there, I would respectfully say that you are of course entitled to your own opinions. Though for anyone else who is kind enough to actually regularly follow my blog, then I hope that you would understand why it means a lot to me to include my ‘Family’ topic each week?

I think it very important that we take every opportunity in acknowledging events such as these in any child’s life.

I think it shows that they are truly loved and valued.

But more importantly entries like this serve to mark an occasion or an achievement that they have had to work incredibly hard to gain, and which can otherwise so easily feel undervalued by them.

The first image above is of Meg on Beau’s tractor. Meg and our little Harri were among several other selected kids who gained the School Governors Award for ‘perfectly’ behaved children.

Now let me tell you this folks… knowing these two as I do this is quite an award to have been given. You can also imagine how chuffed and proud this has made their parents who both work incredibly hard between full time jobs to read and to do their homework with them.

Anyway, as their big brother Kaden is away in France at the moment, the girls reward was a day out over in ‘LegoLand’ and they honestly had an absolutely amazing experience together.

It worked out a lot more expensive than they had all envisaged mind you, but like this award, it was a day that they will all remember and no doubt take away some new and happy memories from. 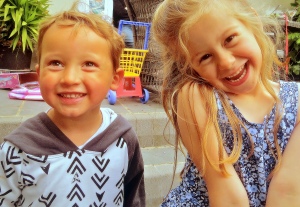 As for our Beau seen here with Mad Harri, well he left his beloved ‘Little Spinnakers’ tots class last week, and so on his return after the summer break he will now cross the playground and join the bigger kids, which is literally next door to where he was placed originally.

So he and his Mum took some flowers into his teachers and a little thank you card for all that they have done for him. It was then he heard the happy news that a couple of his very favourite teachers (though mainly Abi, who is one of the youngest members of their staff over there and who Beau absolutely loves) will also be moving over with him and his little pals. So there we have it.

Kaden will be back home as this is published and touch wood all the kids are doing really well and the future for them continues to feel positive.

Now then let’s just work this out. Four grandchildren and four presents to buy for all their hard work. That’s erm…that’s erm…That’s a small cost to pay which ever way you look at it Bob, now get your wallet out!