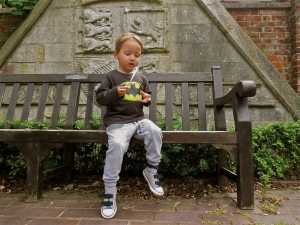 On a recent day out back over to Portsmouth Museum; we had just left the cafe where our Beau had polished off a slice of chocolate cake large enough to hold a door open with.

So then of course he needed to run; as most little lads his age like to do.

Consequently we took him outside and into their beautifully manicured lawned gardens in the grounds. Out there they have a couple of knee high sized hedged maze gardens; which kids who are visiting can go play in; and which our Beau absolutely loves.

After a few daring rescues in his superhero mode of both myself and his nan (as we had to pretend to be lost) he then decided that we should all look for treasure.

So after a lot of searching and scuffling around under the trees, he eventually ended up finding a feather and a plastic bottle top from a fizzy drink.

Nevertheless he was feeling very pleased with himself and ran off with his finds. Eventually he took a seat on one of the benches there where he commenced balancing the plastic top onto the tip of this feather which he had found earlier.

Fortunately this kept him interested just long enough for me to get closer, and to steal this little shot of him.

The rather impressive Coat of Arms in the background made for a more stately composition I felt.

So with the Museum visited and the maze gardens successfully completed, oh and the treasure hunt now over. We felt that it was then time for him his Nan and myself, to get into the camper van, and to drive back home.

This though had to include a run along the seafront just so he could check out the hovercraft, and a few other interests he shares along there.