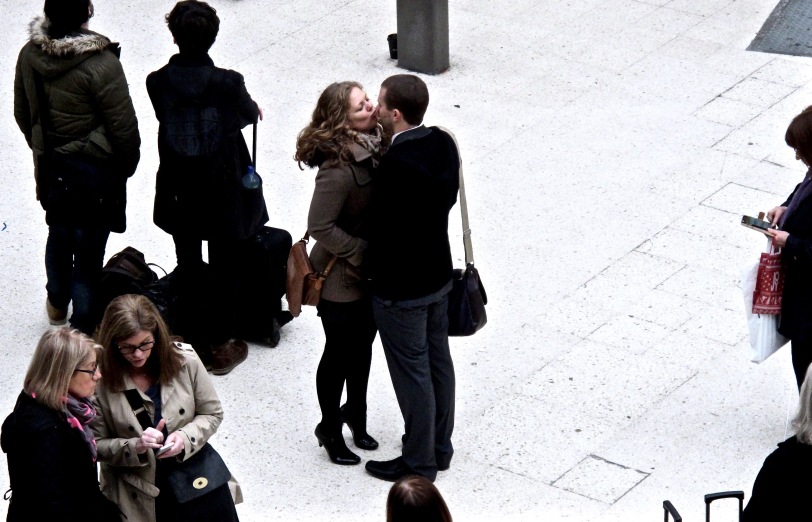 Waterloo Train Station about 11:00am and as usual there were lots of people stood checking the information boards for their train schedules and platform numbers.

I was in the cafe above the station platform level when I observed these two young people obviously in love heading towards each other with those telltale smiles that suggest ‘lurve is very much in the air.’

Drinking my coffee I smiled as the young woman still with her hands tucked inside her pockets safely away from the cold, shuffled up to her fella. Then with the warmest of smiles and standing as close as she was physically able to him, she raised herself up onto her tiptoes, and firmly planted a very loving kiss onto his lips.

Initially it appeared to me at least, that he was acting maybe just a little too cool about the situation. Although it was soon obvious to anybody watching the pair, that he equally held some strong feelings towards this very attractive and bubbly young lady standing there before him.

I liked the interaction between the two and so literally pointed the camera in their direction below. Then using the glass panels surrounding the cafe to steady it I fired off a couple of images.

I quickly checked the screen and was initially unsure if either of the shots I had captured were going to be any good. I then stood up and looked back down to where they had both initially been standing; only to find that they had moved away. Possibly for a romantic rendezvous in London together, or more likely to catch their train.