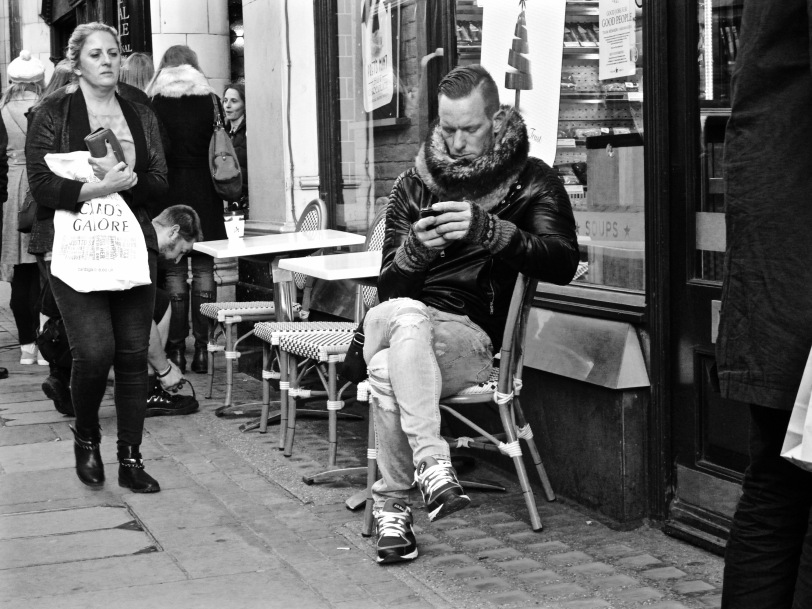 Saw this guy outside of one of the cafes in London and he was obviously feeling the effects of the noticeable drop in temperature.

I believe that he was waiting for a friend to arrive and had decided to take a seat outside whilst he texted to try and establish his whereabouts.

His jumper sleeves were rolled down to just above his knuckles and he had adjusted the fur collar around his jacket more snugly about his neck, as he sat there with mobile in hand, braving the cold.

The lady also in shot seen approaching his table; looked equally uncomfortable, as the pained expression on her face will testify. Hugging her shopping bags as closely as possible it looked to me like she was now wishing she had worn a warmer coat, or something a little more substantial against the biting wind.

Shortly after this image was taken just as I was about to head off; I then noticed a young woman leaving this very cafe with both her hands wrapped tightly around a large cardboard container of what was advertised as being piping hot ‘Soup of the Day’

She then stopped momentarily to a few envious glances from some of the other shoppers in her proximity.

It just looked so warm and comforting to watch the steam spiral from the container as she removed the plastic lid to gingerly sample the delights of it’s contents.

“Yes it is most definitely getting colder…innit though?”

2 thoughts on “‘Getting Colder… Innit?’”