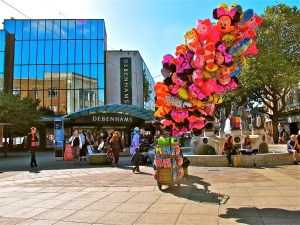 Down at Commercial Road the other day when I spotted this woman selling these brightly coloured cartoon character style balloons.

The immaculately dressed little lad who you can see virtually in the centre of tonight’s image and who can be seen running over towards his Mum; was a ‘proper’ little lad, and a real character.

The sort of kid whom you would have needed eyes in the back of your head for… were you to even hope to keep track of him.

In fact at one point he decided that he wanted to look over the small wall and into the water surrounding the fountain display. His Mum then had to literally grab him by his jacket and lift him away in the nick of time; or i’m positive that he would have been in there head first.

His other two siblings, one of whom was in the pushchair and the other who was his big brother were the complete opposite and were being as good as gold. This little guy though was having none of it.

So after the narrow escape from the water fountain he was then immediately drawn over to a small girl whose mother had just bought her a ‘Bubble Making Gun’ and who was sending a stream of bubbles everywhere, and which he thought was just great to stand and watch.

I captured the last image of him whilst he was standing there mesmerized with the bubble action taking place before him, although only seconds afterwards I snapped this he was off again having found yet one more distraction which had caught his eye.